How To Edit PowerPoint Attachment in Google Slides

Sending documents as attachments is an easy way to communicate with peers and project partners. It often happens that one might send a presentation for approval, suggestions or a bit of final adjustments (depending upon who you are sending it to).

The thing is, the one receiving the PowerPoint file you sent might not have PowerPoint installed on their computer or mobile device! Similarly, someone might not have the time to open a laptop and they might be willing to have a quick look from a smartphone or tablet. So, if you’re a newbie working with Gmail or Google Slides, you might find this tip useful for opening PowerPoint attachments in Google Slides.

If you would like to directly view the PowerPoint attachment in editable format, simply hover your cursor over the attachment and select ‘Edit with Google Slides’.

Or Click to Preview Presentation Before Opening in Google Slides

To preview your attachment before opening it in Google Slides, simply click the attachment from your email. This will open it in slide show mode. In case you would like to edit it, go to Open With –> Google Slides.

In case you have connected other web apps with your Google account, you will also be able to open your attachment with them. For example, I have the Pear Deck web app connected to my account, which is why you are seeing the additional icon beneath Google Slides in the screenshot shown below.

Once your attachment is open in Google Slides you can comprehensively edit it using the given options. Just like PowerPoint you can format text, add/remove objects and placeholders to edit the presentation slides, as well as add transitions and change the background of your slides. 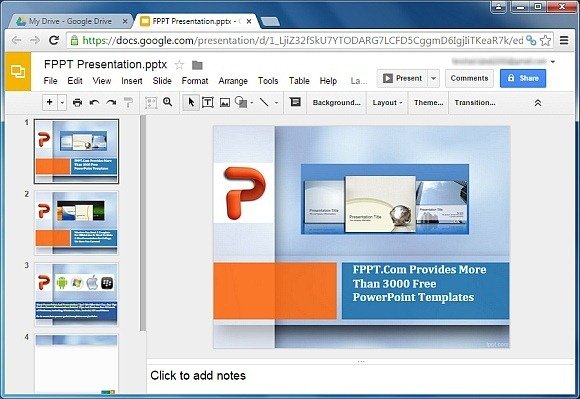